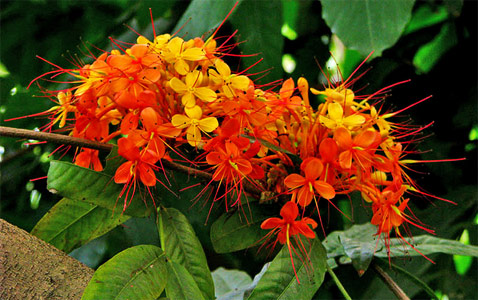 The Ashoka tree in Ayurveda is called Hempushp or Tamrapallava. Though various parts of ashok vriksha i.e. flower, leaf etc. are considered beneficial for women’s health problems, but due to its nutritional and healing properties, it is used as a medicine in Ayurveda for many diseases ( ashoka tree uses) is done.

Ashoka’s bark, leaf (ashok ka patta), flowers and seeds are used as medicine in Ayurveda. Let us know in detail about Ashoka further.

What is an Ashoka tree?

In ancient times, Ashoka gardens and gardens were used to remove happiness and mourning and from this shelter, the names Shoknash, Vishoka, Apshok etc. have been named. Sanatani Vedic people consider this tree to be holy and revered, but even Buddhists view it with special respect; Because it is said that Lord Buddha was born under the ashok tree in Hindi. It is also related to Cupid. Ashoka Pushp has also been counted in the five fluted arrows of Pushp Dhanva (Kamadeva) and names like Smaradhivasa, Nat etc. have also been included in its synonym names.

There are mainly two species of Ashoka, which are used for medicine. Polyalthia longifolia is often identified as ashok tree, which is incorrect; the real Ashoka (Saracaasoca) or Sita is Ashoka, which has vermilion or red colored flowers and yellow-green flowers (ashok phool) in wood. The length (up to 15–20 m) of the timber tree is also greater than the actual Ashoka (up to 6–9 m).

Name of Ashoka tree in other languages

Although Ashoka tree is basically beneficial for gynecological diseases, but apart from these, to know which diseases are beneficial for Ashokarishta, know more in detail.

If there is diarrhea due to eating more spicy food, packaged food or outside food, that the home remedy of bamboo will be very useful. Grinding 3-4 grams of Ashoka flowers (ashok phool) in water and drinking it is beneficial in blood poisoning.

If there is any problem in breathing due to any reason, then taking Ashoka plant to get instant relief is beneficial. Keeping 65 mg ashoka seed powder in betel pan and feeding it proves beneficial in respiratory diseases.

When the disease of hemorrhoids goes into a serious state, then blood starts coming out from the warts. Consuming ashoka (hindi) in this way gives quick relief.

– Drinking 15-25 milliliters of ashok chhal decoction is beneficial in haemorrhoids and menstrual disorders.

-Ashok chhal benefits and take equal quantity of its flowers and soak 10 grams in a glass of water overnight. Sieve and drink water in the morning. Similarly, drink soaked in the morning and drink in the evening. It provides quick relief in blood pressure.

The problem of stone is the result of consumption of polluted food, packaged food and unbalanced diet. Grinding 1-2 grams of Ashoka in 1-2 grams of seeds in water and drinking two spoons of it helps in relieving the pain caused by stones in the kidney.

The use of Ashoka bark is helpful in controlling diabetes because according to a research, Ashoka bark has anti-diabetic properties which prevent the sugar level from rising in the blood.

Benefit of Ashok to Treat Infection

Ashoka bark plays an important role in eliminating infection. Because Ashoka has anti-bacterial properties that prevent the infection from spreading.

If there is a problem of insects in the stomach, then the use of Ashoka can benefit you because it helps in removing the stomach worms due to the presence of vermin in Ashoka.

Due to the anti diarrheal properties found in Ashoka, it helps in preventing diarrhea or diarrhea. Also, due to its astringent properties, it prevents the secretion of excessive jaundice occurring in the intestines, which gives relief in diarrhea.

Women often have white watery discharge from the vagina. Weakness also occurs when white water secretion is excessive. Consuming Ashoka is beneficial in getting relief from this.

Grind equal quantity of ashok bark powder and sugar candy, take 3 grams of it with cow’s milk and take it twice a day, it provides relief in white water.

-15-25 ml ashok bhal benefits: Mixing the decoction in milk and drinking it in the morning and evening provides relief in white water and blood circulation.

Grind 3 grams of Ashoka bark in rice dish and mix 1 gram of Rasaut and 1 teaspoon of honey in it, it is beneficial in regular morning and evening intake. With this experiment, the alum should be washed by mixing alum in the decoction of Ashoka bark.

Get rid of night fall, Ashok bark benefits in nightfall

Night-fall is one of the common diseases of men. Cook 20 grams of Ashoka bark in 250 ml water, with 30 ml remaining, adding 6 grams of honey in it and taking it twice a day is beneficial.

Ashoka is beneficial in attaching broken bones and strengthening bones. Consuming 6 grams of Ashoka bark powder with milk in the morning and evening and blending it, adds broken bone and reduces pain.

In today’s pollution-prone environment, the risk of skin diseases is increasing. Everyone suffers from some skin problem. Ashok bark helps in reducing all these troubles. Grind mustard in the juice of Ashoka bark and dry it in the shade, after that when the boil is to be applied then grind mustard in its bark juice and apply it on the skin. This enhances skin color.

Get rid of pimples

Boil the decoction made from Ashoka’s bark, when it is thick, cool it and mix equal quantity of mustard oil in it. Apply it on pimples, boils and pimples. Regular use will benefit.

Sometimes it takes too long for ulcer wounds to dry, or if another wound comes out on drying, in this case, the consumption of Ashoka bark is very beneficial.

Memory increases with age. Mixing equal quantity of Ashoka’s bark and Brahmi powder, taking one spoon each morning and evening with one cup of milk regularly for a few months intensifies the intellect.

Taking 10-20 milliliters of Ashoka’s decoction gives relief from the pain caused in the whole body.

Relax from the pain of haemorrhoids or piles, Ashoka If there is more spicy, spicy food etc. then the chances of getting piles or hemorrhoids disease increases. In this, the home remedy of piles proves very beneficial. Grind woody leaves and apply on piles moles, it provides relief in piles.

Gonorrhea or gonorrhea is a sexually transmitted disease (STD). In this disease, there is a wound inside the penis from which pus comes out. Taking 2-3 grams of the powder of stem bark mixed with butter and applying it to the genitals is beneficial in poem or gonorrhea.