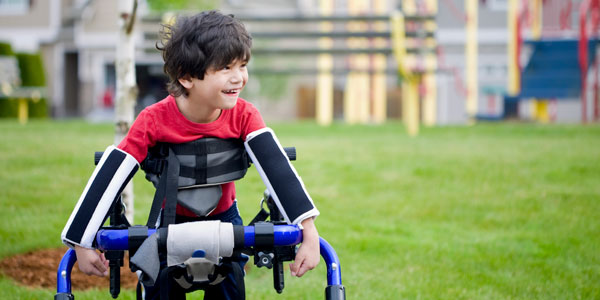 Cerebral palsy is referred to a set of conditions that affect the control of activity and gestures. The affected person cannot move his or her muscles normally due to damage to one or more parts of the brain that control the activity. Its symptoms range from mild to severe, including forms of paralysis.

Most children can improve their abilities to a great extent when treatment begins. Although symptoms may change over time, the cerebral palsy is by definition not rapidly spreading, so if increased damage is seen, the problem may be someone else rather than cerebral palsy.

Many children with cerebral palsy suffer from other problems that require treatment. These include reduced general mental development; Learning disability; Tour; And problem of seeing, hearing and speaking.

1.Spastic cerebral palsy. Approximately 70 to 80 percent of the affected people suffer from spastic cerebral palsy, with tight muscles that make activity difficult. When both legs are affected (spastic diplegia), the child may find it difficult to walk because the hard muscles of the hips and legs can bend the legs inward and cross the knee (this is called caesarean). In other cases only one side of the body is affected (spastic hemiplegia), often the arms are more deeply affected than the legs. The most severe is spastic quadriplegia, which often affects all four limbs and torso, along with the muscles that control the mouth and tongue. Retardation and other problems are found in children with spastic quadriplegia.

2.Diskinetic cerebral palsy. About 10 to 20 percent have a dyskinetic form that affects the entire body. It is detected by muscle tone fluctuations (varying from very stiff to very loose) and sometimes associated with uncontrolled movement (which can be slow and twisted or quick and jerky). .

Children often have difficulty learning to control their bodies to sit and walk. Because the muscles of the face and tongue can be affected, it can also be difficult to suck, swallow and speak.

3.Atoxic cerebral palsy. About 5 to 10 percent suffer from it ataxically, which affects balance and coordination. They can move with unsteady gait and have difficulty with motions that require precise coordination, such as writing.

Many things happen during pregnancy and around the time of birth that can disrupt normal brain development and can result in cerebral palsy. Brain damage occurs before birth in about 70 percent of cases, although it occurs around the time of delivery, or even in the first month or year of life.

Some known causes include:

Infection during pregnancy. Rubella (German measles), cytomegalovirus (a mild viral infection) and toxoplasmosis (a mild parasitic infection) can cause brain damage and result in cerebral palsy.

Insufficient oxygen reaching the fetus. For example, when the umbilical cord is not functioning properly or it separates from the uterine wall before delivery, there is a possibility that the fetus may not receive enough oxygen.

Premature birth Premature babies under 3 1/3 pounds are 30 times more likely to have cerebral palsy than children who are born full-time.

Pain and delivery complications. Until recently, doctors were assuming that asphyxia (lack of oxygen) was the cause of most cases of cerebral palsy during difficult periods. But recent studies show that only about 10 percent of cases have caused cerebral palsy.

Rh disease. This incompatibility between the mother’s blood and her fetus can cause brain damage, which can result in cerebral palsy. Fortunately, Rh disease can often be prevented by injecting a blood product called Rh Immune to the Rh-negative woman around the 28th week of pregnancy and again after the birth of the Rh-positive baby.

Cerebral palsy achieved. About 10 percent of children with cerebral palsy receive it after birth due to brain injuries that occur in the first two years of life. The most common causes of these types of injuries are brain infections (such as meningitis) and head injuries.

How is cerebral palsy treated?

A team of healthcare professionals works with the child and family to identify the child’s needs. This team may include pediatricians, physical medicine and rehabilitation therapists, orthopedic surgeons, physical and occupational therapists, ophthalmologists, speech / language pathologists and social workers and psychologists.

Physiotherapy begins shortly after the child is diagnosed. This increases motivation muscle skills (such as sitting and walking), improves muscle strength, and helps prevent contractures (shortening of muscles that limit joint activity). Many times braces, splinters, or casts are used along with treatments to help prevent contractures and improve the function of hands and legs. If the contractures are too severe, surgery may be recommended to enlarge the affected muscles.

Medications can be used to calm spasticity or to reduce abnormal activity. For some children with spasticity affecting both legs, selective dorsal rhizotomy is most likely to permanently reduce spasticity and improve the ability to sit, stand, and walk. In this process, the doctors cut off some nerve fibers which are the biggest cause of spasticity. This process is often adopted when the child is between two and six years old.

Research suggests that cerebral palsy originates from incorrect cell growth early in pregnancy. For example, a group of researchers recently found that more than one-third of children with cerebral palsy had enamel missing (enamel) on some teeth. Scientists are also examining other events, such as brain bleeding, seizures and breathing and transmission problems, that put the brain of a newborn child at risk. Some investigators are conducting studies to find out if certain drugs can help prevent newborn seizures and other researchers are investigating the causes of low birth weight. Other scientists are exploring how brain injuries (such as brain damage due to lack of oxygen or blood flow, hemorrhage and seizures) can cause brain disease by causing abnormal secretions of brain chemicals. Can.

These herbal sachets are prepared from ingredients such as Shankh bhasma, Sutshekhar ras, Parvalpishti, Shukta, Giloy, Kamdudha ras, Shvetparpati that gives calming effect on the stomach.

Panchasakar churna is an Ayurvedic formulation that consists of mainly five ingredients as its name describes. This medicine is known to have properties like laxatives and purgatives etc. The Churna contains ingredients such as Shunthi (Zingiber officinale), Haritaki (Terminalia chebula), Trivrith (Operculina turpethum), Pippali (Piper longum), and Sauvarchala lavana. It decreases the abdominal pain, bloating, constipation that maintains a healthy colon and supports the overall health of the body.

Anu tailam is herbal and ayurvedic oil used for the nasal instillation for curing the various diseases.  It is administrated through the nasal passage to lubricate, protect and calm the mind. It includes – Sesame oil, Bael tree root, Solanum root, Cinnamon stem bark, Holostemma tuber, cardamom fruit, etc. It mainly balances the Kapha dosha and is beneficial in diseases of head, brain, face, nose, and eyes. Its use is generally recommended in chronic headache, problem of migraine, sinusitis, improves the voice, and vocal cords. Anu tailam gives effective results to asthma patients.

Ashwagandha is an ancient medicinal herb that have multiple benefits. It shows effect deeply and provide nourishment to deep situated dhatus (muscles). The tablet increases muscle mass and provide strength to the whole body. Further, it shows anti-cancerous properties that prevent further spreading of infections.

Trikatu syrup is considered as the best Ayurvedic remedy in pacifying the Vata Doshas and has amazing results in curing this condition. TRIKATU SYRUP is purely Ayurvedic formulation made up of three herbs. CAC Trikatu Syrup helps to eliminate excess Kapha or mucous from the body, supports respiratory system, manages weight, helps to take out impurities or ama from the body, supports healthy detoxification, reduces swelling. It shows anti-inflammatory, analgesic, expectorant, antioxidant properties.  This syrup is made up of equal parts of three herbs such as Pippali (Piper longum), Shunthi (Zingiber officinale), & Marich (Piper nigrum) that maintains the metabolism in the body. It is an Appetizer and it improves digestion, supports normal gastric function, and normal circulation.