Idiopathic  thrombocytopenia is a disorder that can lead to easy or excessive bruising and bleeding. The bleeding results from unusually low levels of platelets — the cells that helps blood clot.

ITP occur when the body’s immune system mistakenly attacks platelets of the body and destruction of platelets occur. In children, it may follow a viral infection. In adults, it may be chronic.

Immune thrombocytopenia may have no signs and symptoms. When they do occur, they may include:

There are two main types of ITP –  acute  and chronic

As ITP is  an autoimmune disorder, So Immune thrombocytopenia usually happens when your immune system mistakenly attacks and destroys platelets, which are cell fragments that help blood clot. In adults, ITP  may be triggered by viral infections like HIV, hepatitis or H. pylori (bacteria that causes stomach ulcers)., Mostly in children with ITP it follows  viral illness such as the mumps or the flu.

In ITP, treatment is maily based upon the platelet count.  When Platelets count become low can cause spontaneous bleeding in the brain and other organs. Treatment mainly used in ITP coantains-

SURGERY – When condition or symptoms doesn’t improve with medications then surgery is advised .In this splenectomy is performed to remove the spleen of patient.

According to Ayurveda ITP is co-related with bleeding disorder “Tiryaka Raktapitta”. In this disease, all three doshas of body get vitiated which are circulating in the bloodstream and attacks the platelet cells in the body which cause decrease in platelet cell count.

As we see that in Modern Science, there are medications of high dose  which have only symptomatic effect and cause side effects  like weight gain, osteoporosis, diabetes, fatigue etc. And  after surgery of splenectomy there is a decreasing the ability to fight with infectious agents  so  increase the risk of infections.

So it become very important to consider these factors and choose ayurveda as a preferred pathy for treatment . In Ayurveda for ITP, there are also various herbs that regulate immune function and increase platelet count in the body.

Strengthen and uplift your immune system and treat the illness with CHANDIGARH AYURVEDA CENTRE (CAC).

CAC is manufacturing with herbal products which provide the combination of wide range of Ayurvedic formulations to treat the ailment.

Formulations  for ITP by CAC

CAC provides the best and effective combination as Ayurvedic treatment for ITP. These combination are prepared from best quality of herbs following the principles of ayurveda.  These are free from  any kind of adulterants and safe to use . 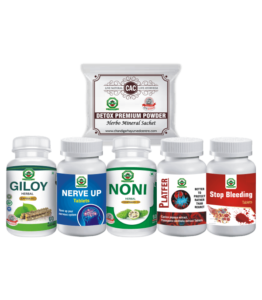 The powder contains a mixture of  herbs which plays very important role in the treatment of ITP.  The effective  combination strengthen the immune system and having the ability to fight against infections with having antibacterial, antiviral,  Anti-inflammatory properties.

Giloy Capsules are natural and purely ayurvedic formulation. Giloy  can be used in the form of capsules, juice and powder. But CAC capsules are highly effiecient as they contain required amount of Giloy in them and are 100% natural and safe. Giloy is considered as one of best medicine in ayurveda to fight against many diseases and increase immunity.

These are herbal combination prepared from herbs like Papaya (Carica papaya) &amp; Giloy (Tinospora cordifolia) that in combination increases the platelet counts naturally and  builds up immunity.

Nerve up tablets help in balancing the vitiated doshas and acts as nerve stimulant. This tablet helps to treat the  symptoms related to ITP.

As this kit contains the medicines which have multi-dimensional effect on body which is required for the illness . For detailed information visit our website
https://www.chandigarhayurvedcentre.com/product/itp-care-kit/