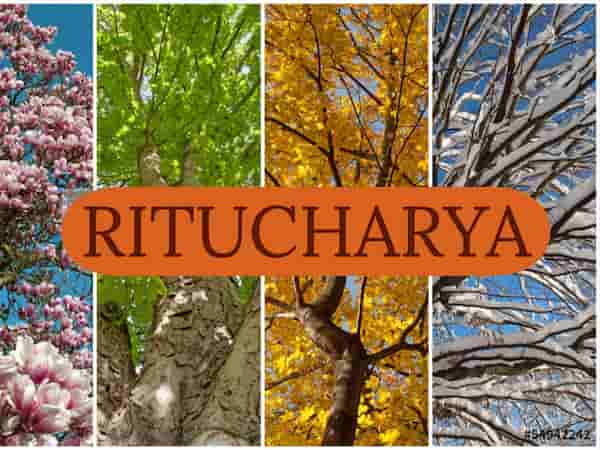 The word ritucharya comprised of two words “RITU” means season and “CHARYA” means regimen or discipline. Ritucharya consists of lifestyle and ayurvedic diet routine to cope with the bodily and mental impacts caused by seasonal changes as recommended by Ayurveda.  Ritucharya helps us to build our physical strength and mental capability to battle ailments that may happen due to seasonal changes. Ritucharya balances all the three doshas in our body and keeps us fit and healthy throughout life.

In ritucharya, year is divided into two kaal (time period):-

Each Kaal comprises of 3 seasons which gives six seasons in a year. Each season lasts for two months.

The word aadaan derived from “adaan” meaning “taking away”. During aadan kaal, the sun starts traveling in a northward direction. In this season, the sun and the wind are extremely powerful. The Sun absorbs off all the energy and strength from people, and cooling qualities from the earth.  This season provides pleasantly warm weather and absorbs energy and strength from plants & humans. In this season the Sun gives hot & dry qualities to living beings & plants. Increasing heat and reduces the strength of individuals. During this period plants show a predominance of bitter, astringent, and pungent tastes.

Mid-January to Mid-March is considered as Shishir Ritu (winter), which incorporates the months of Magha and Phalgun. This season is associated with dryness and dehydration which leads to the accumulation of Kapha Dosha and the aggravation of Vata Dosha. During this season, the environment remains cold and windy. According to Ayurveda, physical strength is at its peak during this time and it is the ideal period to build strength, stamina, and immunity in our body. People become lethargic and less energetic. The strength of the person in this season remains less, deposition of the Kapha Dosha and Agni (Catabolism) remains in a higher state.

Diet – During Shishir Ritu, foods that are alkaline in nature and have sour taste are preferred, this includes amla, lemon, and starfruit others include wheat/gram flour items, cereals, and pulses, rice,  and others, are advised. Ginger, garlic, pippali, sugarcane items, milk, and milk products are also taken in this season. Food having (bitter), Katu (Pungent), kashaya (astringent) dominating are to be kept away. Sheet (cool), Lagu (light) foods should also be avoided. This includes Amla, Lemon, and Star fruit. Cereals, pulses, wheat or gram flour products, rice, corn, and others, are advised.

Lifestyle: – There is the natural accumulation of Kapha due to the cold and wet environment, so one should try to keep warm. Warm baths, sauna, and living in a warm house are beneficial. Do vigorous exercises. Regular body massage with oil according to individual Prakriti should be done. Head massage is also recommended. Massage not only generates heat, thereby providing respite from cold, but it also keeps Vata dosha from getting aggravated. Steam baths (swedan) should regularly be taken.

This is the season of new leaves and flowers. Mahabhuta in this season Prithvi and Vayu, and rasa during this season are kashaya (astringent). The strength of an individual remains medium in this season, impair of Kapha dosha occurs and Agni remains low.

Lifestyle: – Exercising is very important during this season. Massage with Chandan, Kesara, Aagaru, and bathing with lukewarm water are considered ideal. Anjana and evacuative therapies like Vamana and Nasya are recommended. Sleeping during day time should be avoided.

Time period Mid-May to Mid-July. The word ‘Grishma’ is derived from another Sanskrit word ‘Grishmarutu’ which meaning ‘summer’. This season is intensely hot and the environment with the unhealthy wind. The lakes and rivers are dried up, the plants are lifeless and the strength of an individual becomes weak. Deposition of Vata Dosha happens in this season but the Kapha Dosha is relaxed during this season. Agni of the person remains mild. Lavana (salty) food with Katu (pungent) and Amla (sour) taste and Ushna (warm) foods should be avoided. According to the Hindu calendar, this Grisham Ritu lasts for two months. During the Grishma Ritu, the heat of the sun breaks all the temperature records and it is defined as the season of exhaustion, lethargy, dehydration, and lack of energy.

Diet:- Foods that are light to digest and having Madhura (sweet), Snigdha (oily), Sheeta (cool), and Drava (fluid) quality are used, for example, rice, lentil, etc., should be eaten. Drinking a lot of water and different fluids, like cold water, buttermilk, fruit juice, meat soups, mango juice, curd with pepper, is suggested. At night milk with sugar should be taken. Fresh fruits, salads (cucumber, carrots), and boiled rice maybe add to the diet. Diluted syrup of some herbs and fruits should be recommended- Kamala (Lotus), Gulaba (rose), Amra (Mango), Draksha (Grapes), Chandana (Sandal), Ushira, Lemon. These can be made into syrup and diluted with water and served when needed.

Diet to be avoided- Greasy, hot, spicy, salty, and sour food items, milkshakes, and curds should be avoided if consumed should be taken as churned curds with some pepper.  Alcohol should be avoided as consumption of alcohol may lead to a burning sensation, dryness in the body, and debility.

Lifestyle – Advised to sleep for a while during the daytime in a cool place, as the nights are shorter during summer, apply the paste of sandal all over the body and take a cold bath, try to stay indoors and not get exposed to sun rays as far as possible, wear thin and light clothes and use perfumes that are cooling in nature. Extreme exercise or hard work is to be avoided, a lot of sexual liberality and alcoholic preparations discontinue for some time.

During Visarga Kala, the Sun moves in a direction of the south, and this direction of the Sun is called Dakshinayana. The Sun moves away from us and the Moon assumes greater importance in our life. The Moon is the same in nature (cool) and weakens the agneya properties of the sun. The coolness of clouds, strong winds, and rain further cool the Earth.  All organisms gain strength gradually in Visarga Kala. This strength gaining period starts in Varsha Ritu (Monsoon), which is the first season in Visarga Kala. This strength gradually increases until it reaches its peak in Hemanta Ritu (early winter). Visarga Kala is considered ideal in Ayurveda for conception and childbirth. Children born at the peak of visarga Kala that is Hemanta Ritu are considered to have greater strength and ojas. It is a very good time for conception and development of pregnancy when the baby is conceived at this time.

Varsha Ritu falls in the visarga Kala in the month of Shravan and Bhadrapada (mid-July to mid-September). During this season, the sky is cloudy and rain comes without thunderstorms. The lakes and rivers are filled with water. Dominance of Amla (sour) rasa and Prithvi and Agni mahabhuta. The strength of an individual becomes weak in this season. Variation of Vata Dosha and deposition (sanchaya) of Pitta Dosha, Agni also gets vitiated in this season.  During this season, almost all Doshas go out of balance and that is why Ayurveda strongly recommends Panchakarma during the rainy season. The digestive fire or Agni weakens during the Monsoon, causing diseases related to digestion.

Diet –Consume food that is light and fresh which includes barley, rice, and wheat, freshly    cooked food should be eaten. Uncooked or half-cooked vegetables and salads should be avoided. Drinking boiled water with some honey, herbal tea is ideal for this season. Avoid curd and ice cream as they can cause flu and fever. People take buttermilk instead of curd. Avoid drinking excess fluids as this further slows down the metabolism. Increased intake of sweet, sour, and salty food.

Lifestyle – In this season, Ayurvedic Panchakarma or detoxification of the body is beneficial. Avoid sleeping in the daytime. Keep your surroundings dry and not let rainwater accumulate near you. Doing oil massage followed by a warm water bath regularly. Avoid getting wet in the rainy season, as your body is prone to diseases and flu. Always wear dry and cotton clothes.

In this season Pitta dosha gets aggravated. Sudden exposure to sunlight after the rainy season aggravates Pitta in your body due to which there may be diseases like Acidity, skin disorders, hemorrhage, burning micturition, etc. in this season dominance Lavana (salty) rasa and APA and Agni Mahabhutas. The strength and energy of an individual are medium not too high, not too much low.

Diet – Ghee highly beneficial to reduce pitta dosha and also helps improve Agni (digestive fire), and removes dryness of the skin caused in the rainy season. Foods that are cold in potency, easily digestible, sweet, astringent in taste are useful. Avoid spicy, sour, oily food that aggravates Pitta dosha. Avoid too much intake of tea and coffee, intake of milk and milk products except curd, sweets, and black grapes.

Lifestyle – Abhyangam (Body massage) with oils made of Chandan, coconut oil, Ushira, etc is beneficial. Stay relaxed and calm, avoid anger and good sleep for a proper hour is advised. Wear a pearl necklace which make a coolant effect on the body. Avoid direct exposure to sunlight and eastern winds. Pranayama is beneficial. Panchakarma is highly recommended in order to detoxify the body and stabilize pitta dosha.

According to Ayurveda, the Winter Season from Mid-November to Mid-January is characterized as Hemant Ritu. Since winters impart certain changes in our body and surroundings that may trigger Doshas in our body. This can be reduced by few modifications in our lifestyle, diet, and routine to keep the doshas in balance. Dominating madhura Rasa and Prithvi and APA Mahabhutas. The energy and strength of an individual remain higher and vitiated Pitta Dosha and the action of Agni is increased.

Lifestyle – Do regular oil massage. Daily Exercise and Yoga help to warm and calm your body. The use of Woolen clothes protects you from winters. Footwear should be worn always. Avoid sleeping during the daytime may increase your Kapha. Don’t Go out in the cold may harm your body, and increase Vata.