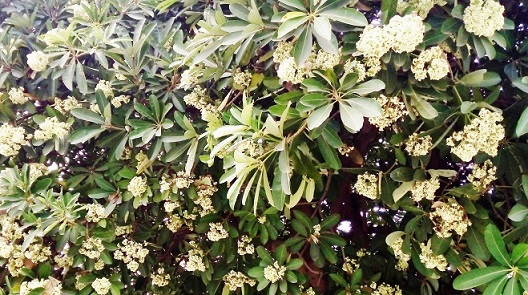 The seven-leafed tree is called Saptaparni or Satvin as a tree with seven combined leaves. This tree is known as an evergreen tree with a straight growing trunk, early growth and distinctive branching. Due to its evergreen and attractive habitat, etc., this tree can be planted in gardens, residential complexes, offices, schools-colleges, on both sides of the road, etc. The place is found to have been done on purpose.

The Saptaparni tree is known by many names for its usefulness and quality. Blackboard Tree, Indian Devil Tree, Data Bark Tree, Millwood Pine Tree, White Chase Wood, Pulai etc. The Saptaparni tree is known by the English names and the Hindi name Chetun. Kanher, Pandharakuda, Pandhara Chafa etc. It belongs to the family “Apocynacae” of plants and is known in botany as “Alstonia scholaris”. This tree is considered as the “State Tree” of the State of West Bengal.

Saptaparni is a tree found in tropical and subtropical regions. It is more or less widespread in the Indian subcontinent and Southeast Asia. This tree is found to be planted deliberately in some continents and countries. India, Japan, Sri Lanka, Bangladesh, Malaysia, Burma, Australia, Polynesia etc. The tree is found in semi-evergreen moist deciduous forests. This tall tree grows up to 40 to 60 feet tall. Plants with high humidity, high rainfall, moderate to heavy soils and low temperature are ideal for growing this tree. This tree is found from the sea level to an altitude of 1250 meters.

The tree flowers in October-November. The pods mature by March. The flowers are as fragrant as the nightingale. The flowers are not immediately visible, but the fragrance of the flowers indicates that they came. This is a feature of Saptaparni. Especially in the evening. The clusters of greenish white, pentagonal flowers on the upper stalks of the leaves are found in the leaf axils.

Saptaparni flowers in autumn after the end of monsoon. Flowering does not last long. When the flowers fall, long, slender pods hang in pairs on the tree. When the pods are planted on an old large saptaparni tree, these trees look a little different. After a few days, the pods sprout and the white thread seeds fly away.

These trees can be seen in Mumbai city

As this tree is beautiful to look at, it is planted in gardens, orchards, on both sides of roads, in dividers and in the vicinity of government offices, schools and colleges. Wood is used for making paper, for making boxes and for making pencils, firecrackers and boxes, school boards etc.

The bark of this tree is bitter and astringent. The bark and leaves of the stem are used in traditional medicine like Ayurveda, Unani, Siddha etc. to cure various ailments. In Ayurveda, the bark of Saptaparni tree is used for Panchakarma purification This  is good for malaria fever. The tree is also called “Indian Cinchona” as it cures malaria from the bark. The bark is used to treat diarrhea,  malaria fever, foot, asthma, skin disorders, snake bites etc. The bark is used for toothache, joint pain, diabetes and as an anti-virus. The white scab coming from the scab is used to cure ulcers.

There are many chemical elements in this plant, of which 3 main chemical elements are Ditamine, Echitenine, Echitamine which are alkaloids. They are used as an alternative to the famous malaria drug quinine. Quinine is obtained from the cinchona tree. Hence Saptaparni is also called “Indian Cincona”.

It has been calculated in Tiktaskandha, Kushtaghna, Udardaprashaman, Shirovirechan and Charak Samhita’s Aragvadhadigana, Lakshadigana and Adhobhagahar Gana. Saptaparna is mentioned in the Charakasamhita as a component of various kalpas used in the treatment of leprosy, herpes and urinary incontinence and in the Sushruta-Samhita in the treatment of ulcers, leprosy, sepsis, diabetes, chronic fever and epilepsy.

Alstonia spectabilis R.Br. (Saptachchhadi, Saptaparnika) – It is an evergreen tree up to about 40 m tall. Its bark is brown, smooth and with cracks and the end bark is yellowish in color and without marks. The leaves are arranged in a circular order in the number of 3-5, pointed at the apex and bright green in color.

It is an antidote for shortness of breath, sores, colic, worms, leprosy, ulcers and blood defects.

Dosage and method of medicinal use