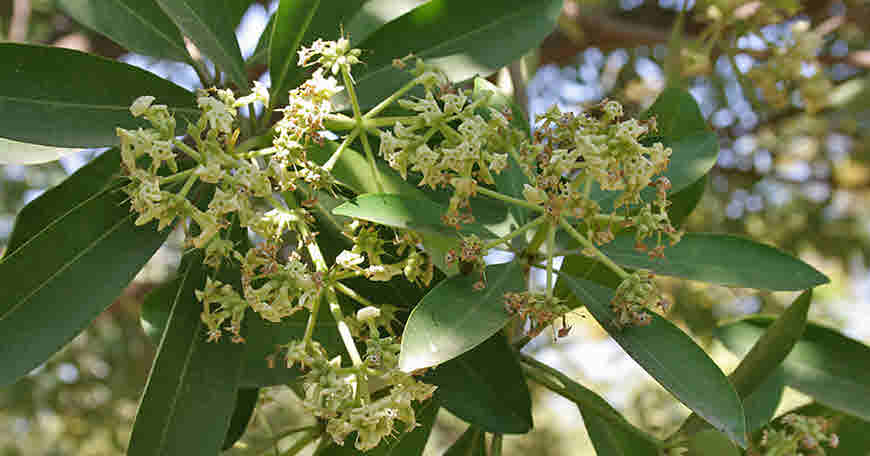 It is found in all the dry deciduous and verdant forests of India, in the western tropical Himalayas and in Assam and is planted as an ornamental plant on the roadsides or gardens. It has been enumerated in the Tarktaskandha, Kushtaghan, Udardprashamana, Shirovirechan and Sushrutasamhita’s Argavadhagdhana, Lakshadigana and Adhibhakahara ganas of Charaksamhita. In Charakasamhita, Saptaparna is mentioned in the treatment of leprosy, erysipelas and diuretics and in the Sushruta-Samhita as the constituent substances of various kalpas used in the treatment of diseases like ulcers, leprosy, pseudo-diabetes, chronic fever and aphasma.

It is about 12-18 m tall, large, everlasting, beautiful tree. Its letters are simple, numbered 4–7, in circular order at the end of the branches. Its flowers are white or cyan white. Its pods are 2–2 together, thin, cylindrical, 30–60 cm long, about 3 mm in diameter, circular and bunched.

It is an antidote for shortness of breath, sores, colic, worms, leprosy, ulcers and blood defects.

Saptaparna is an anti-hypertensive factor, anti-cancer, anti-microbial, anti-toxemic and depressant of the central nervous system.

Its aphrodisiac is digestive, mild laxative, anthelmintic, antipyretic, purgative, laxative, appetite suppressant and tonic. And its letters and letters are anti-ulcer.

method of medicinal use

Putting Akshir (1-2 drops) of Saptaparna in the ear alleviates earache.

Dant krimi- If there is a dent between the teeth in the tooth-worm-worm tooth, then by filling jaggery or wax in it, by doing Dahan Karma, by filling Saptaparna Akshir, the toothache is alleviated.

If phlegm and bile are also present in respiratory disease, then by mixing 1 gram Pippali powder and honey in 5 ml Saptaparna Patra-Swaras, drinking it gives quick benefit.

Germination – By making decoction of stem bark of Satauna and feeding it in the quantity of 15-30 ml, chronic gonorrhea is alleviated.

Liver Disorders– By making decoction of leaves of Satauna and consuming it in the quantity of 10-30 ml, there is benefit in liver disorders.

Gonorrhea: Grind the flowers of Kutaj, Kapitha, Rohitak, Vibhitak and Saptaparna and consume 1-2 grams of Kalk or the skin, leaves, roots, fruits, flowers etc. Consumption of decoction made from is beneficial in gonorrhea.

By making decoction of Sadrameh-Saptaparna and feeding it in the quantity of 15-30 ml, there is benefit in Sandrameh.

Grinding the bark of rheumatoid arthritis and applying it on the joints treats rheumatism and rheumatism.

The use of leprosy-saptaparna in bath, betel leaf, paste, powder etc. and consumption of proven oil ghee etc. from it is abundant in leprosy.

Applying the letter of Dushtavarna-Saptaparna on the affected area of ​​leprosy, leprosy and Dushtavarna are planted.

Grinding and applying the bark of Uran-Chhativan with milk, ulcer is planted.

By making a solid decoction of hemoptysis-Chhativan (10-30 ml) and mixing 500 mg chopchini powder in it and consuming it with milk, hemorrhoids are alleviated.

Fever-chattivan bark, gilloy, vasa leaf, patol leaf, nagarmotha, bhoj leaf, khadir bark and end bark of neem are taken in equal quantity and made into decoction and fed in 15-30 ml, it gives relief in fever.