HomeDiseases & Conditions A-Z What is Writer’s cramp and How to treat it? 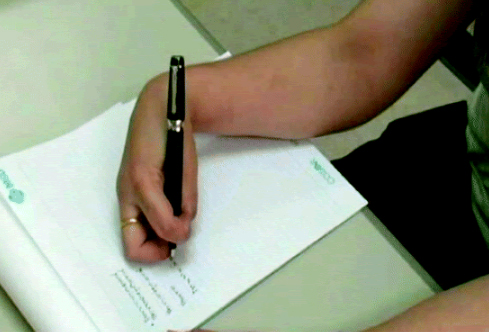 Writer’s cramp is a type of focal dystonia that affects hands , fingers and fore arm . It is an idiopathic movement disorder of adult onset that is  characterized by abnormal posturing and movement of the hand and forearm during tasks requiring skilled hand use, such as writing.  Focal dystonia of the hands or Writer’s cramp  is a neurologic movement disorder.  This disorder is characterized by involuntary and excessive muscle contractions which occurs as a result of wrong information send  by  the brain to the muscles These signals can twist hands or fingers into odd postures.

Writer’s cramp is known as a task-specific dystonia. As It happens almost only while performing  a particular activity or task. Like during playing musical instrument that’s why also known as musician’s cramp.

There are mainly two types of writer’s cramp i.e. simple and dystonic.

There is not any specific test for confirming Writer’s cramp. But there are specific parameters that can be helpful in deciding the severity of disease.

Ashwagandha is widely used herb in ayurveda that is commonly used in treating various disorders . Ashwagandha not only posses therapeutic properties but also acts as an immunity booster. It acts as anti oxidant agent so in helps preventing oxidative damage and  inflammations. Ashwagandha  nourishes the weakened muscles as well as tissues that prevents unwanted contractions and unusual postures of hands or fingers thus acts as good nerve tonic that strengthens the physical . Also  helpful in relieving stress or anxiety so strengthen nervous system.

Giloy is designated as ‘ Amrit herb of ayurveda ‘due to its ability to treat many disorders . Giloy contains chemical  constituents like berberine, giloin, choline due to which it acts as anti-inflammatory, anti stress, immunomodulator etc.

Bacopa monnieri commonly known as brahmi is  designated as ‘Herb of Grace’ . Brahmi is a very good  CNS stimulator, that is helpful in treating brain disorders. Brahmi contains  active constituents like triterpenoids saponins , alkaloids, sterols which help in overcoming the many disorders like mental diseases related to memory impairment, sleeplessness and protects bone from arthritis and inflammations. Brahmi acts  a brain tonic which relaxes muscle contraction associated which brain cells and soothes the nerve cells and helps in prevention of writer’s cramp.

Guggulu is considered as one of the best medicine in ayurveda for treating vata disorders. Guggulu is very helpful in treating painful condition also a very good anti inflammatory agent. So it helps in balancing the vitiated doshas of the body.

Turmeric is one of widely used herbs in ayurveda . Turmeric contains curcumin which helps in  relieving pain, inflammation and stiffness. Antioxidants presents in turmeric  neutralize free radicals thus helping to protect our cells and tissues and relieves pain

Ginger contains chemical compounds like gingerols and shogaols that posses  anti-inflammatory properties . These compounds also have antioxidant properties so helpful in  providing strength to nervous system and relieve pain and stiffness.