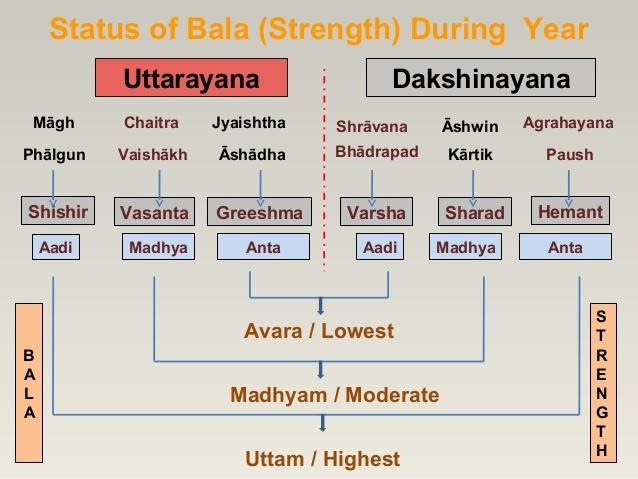 Concept of Shad Ritu in Ayurveda

In Ayurveda, division of year is done on the basis of movement of sun into northern and southern directions known as Utterayan ( adana kal ) , Dakshinayan ( Visarga kal ) respectively and  further  into six seasons namely Shishir ,Vasanta , Grishma , Varsha , Sharad , Hemant . Each kal consists of three ritus –

The nomenclature coined as Adana means taking away and visarga is giving strength to all creatures.

In adana kal sun and wind is powerful and during this period sun takes away the qualities of earth and strength of the creatures diminished.

In Visarga kal sun releases the strength by empowering moon and earth becomes cool due to clouds , rain and cold wind . Hence the strength of creatures is restored in this period.

As Varsha ritu or starting of monsoon is the indicator for the appearance of Visarga kal and restoration of lost strength during  adan  kala . In  Varsha ritu aggravation of vat dosha occur and pak of pit dosha gets amla in nature due to which in varsha ritu sarvadosh Prakopa occur.

Aggravation of doshas in varsha ritu

Vata – Accumulation of vata dosha occur during the dry or dehydrating heat of the summer and  It aggravated during rainy season  which leads to various digestion related issues .

Pita – Accumulates during the rainy season due to the acidic conditions of the atmosphere results in weakened digestion.

As in Varsha ritu there is accumulation of pita dosha and aggravation of vata , which is the major cause of various diseases occurring during the rainy season.

In Ayurveda, a specific regimen has been given for dincharya and ritucharya to sustain a healthy life style. In Ritucharaya, diet and life style according to condition of doshas for each Ritu  has been described by Acharyas .

Diet to be followed in varsha ritu

According to Ayurveda , ‘Agni’ is the main factor that is responsible for all the digestive & metabolic activities of the body and vitiation of agni can cause various health related issues. During the rainy season, Agni or the digestive fire gets weak due to dosha imbalance and  which leads to various diseases. Thus  a proper diet to be  followed during this season  to balance the vitiated doshas and stimulate ‘Agni’ to perform proper digestion.

Few guidelines related to diet to be followed during  Varsha ritu

Life style to be followed in varsha ritu

In Ayurveda it is said that one must follow diet plan and life style according to the season. And the change in season must  be gradual over a period of 15 days. One should slowly give up the ongoing regimen and adopt new one . If sudden changes are brought , then body may not be able to cope up with them and can lead to health related problems