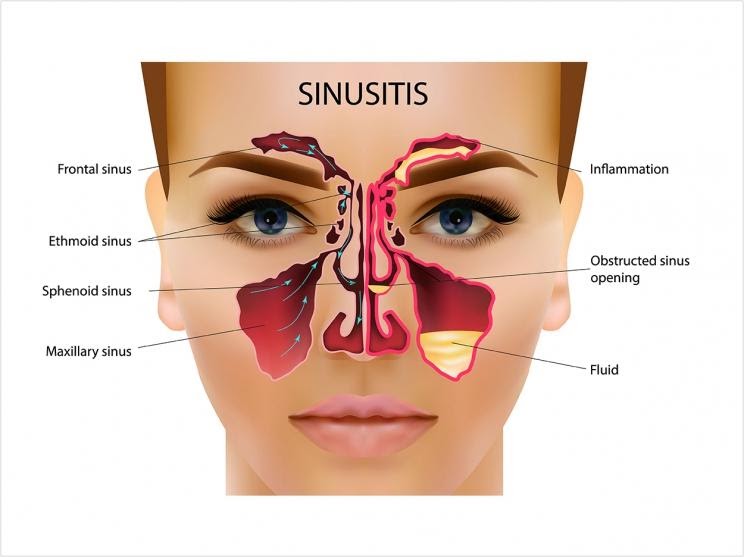 Sinusitis  is a condition in which the air passage i.e. sinuses of the nose become swollen and inflamed. Most commonly  it occurs due to an infection from a virus, bacteria, or fungus.

A sinus is a hollow, air-filled  cavity. Sinuses those hollow   air passages in the skull and connected to the nasal  by a narrow hole or space in the bone (ostium). In Human body  four pair  of sinus are

These sinus are known as PARANASAL SINUS. The sinuses produce mucus that protects the body by trapping and moving germs away. When blockage of these opening occur or too much mucus build up , then bacteria or virus grows up easily cause sinusitis.

In acute sinusitis symptoms are present for 4 weeks or less.

In Sub acute sinusitis symptoms are present for 1 to 3 months. This condition may occur due to infections or allergies.

Chronic sinusitis a condition in which sinusitis remain for three months or longer time although patient taking medication.

SYMPTOMS THAT YOU MAY NOTICE

Diagnosis of sinusitis is made on the basis of history of patient and by doing  physical examination of the patient. In chronic cases imaging techniques like CT-scan , MRI are helpful to examine nasal passage.

Antibiotics are used for sinusitis in case of any kind bacterial infection.

Surgery is to be done  to clear the sinuses, in case of  deviated septum, or to remove polyps or any bony growth.

In Ayurveda, sinusitis can be correlated with Dushta Pratishyaya, in which the main dosha affected is Kapha along with dushti of prana vata.

As Ayurveda is the ancient science which emphasize on balancing of tridosha and treat the root cause for any ailment. Like ways the Ayurvedic approach to sinusitis treatment  involve a combination detoxification processes through Panchakarma, oral medicines, dietary changes and life style modifications.

Nasya (shiro virechana): Nasya Karma is one of the five detoxification therapies mentioned in Ayurveda and  highly successful in treating Sinusitis.  In nasya karma medicated powders, oils and herbs are administered into the nostrils to stimulate the secretion of mucus and thereby dissolve and loosen mucus which reduce congestion and inflammation provide relief to patient.

Dhumpana is considered as best treatment for vat-kaphaj disorders. In dhumpana dhum of medicated herbs given to patient in systematic way by which nasal passage can be cleared and reduce the kapha.

is also useful in nasal congestion.

Chandigarh Ayurved Centre provide  the best and effective treatment for Sinusitis, which naturally cure this condition in a without causing any side effects.

CAC provide you the  ‘Sinusitis Care Kit’ that contains all the natural and ayurvedic medicine which are free from any kind of preservatives and adulteration , so that you can take effective ayurvedic treatment. 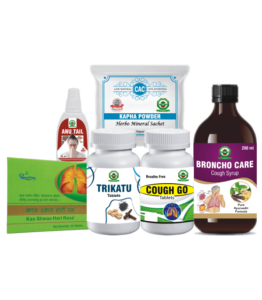 As the name indicates this Kas Shwas Hari rasa is very effective for upper respiratory tract related problems. This is combination of ayurvedic medicines like shwas kasa chintamani rasa, laxmivilas rasa and many more that are being used from the ancient time to treat sinusitis , bronchitis etc.

Medicated herbs used in this tablet are widely used in prevention of congestion, cough and in allergies.

Broncho Care syrup is purely ayurvedic formulation. It reduces kapha formation in the lungs and have expectorant action on the respiratory system. Broncho care syrup act as an  antioxidant, anti inflammatory, immuno modulator .

This tablet contains herbs like saunth, pippli , marich which have properties to clear any kind of blockage due to kapha dosha, so very effectively used in dushti of kapha dosha.