JUVENILE REUMATOID ARTHRITIS (JRA) is a type of arthritis which is also known as Juvenile idiopathic arthritis, is a common condition in children below 17 years of age. Juvenile rheumatoid arthritis leads to bone stiffness, swelling and stubborn joint pain. The symptoms vary patient to patient, some patients have the signs and symptoms for a few months while others may have them throughout their lives.

Juvenile rheumatoid arthritis can cause serious complications, such as growth problems and eye inflammation. JRA is more common in girls as compared to boys.

THE COMPLICATIONS WHICH ARE MOST SUFFERED ARE

Though, the exact causes of juvenile arthritis are still unknown. However, JRA is considered to be an autoimmune disorder in which the immune system attacks its own cells and tissues. And reasons which trigger it can be

In Ayurveda, there are three energies or Humors – vata, kapha and pitta are responsible for the health of an individual. AGGRAVATED VATA AND KAPHA DOSHAS ARE RESPONSIBLE FOR JOINT PROBLEMS. But in Amavata, alonwith vata aggravation, accumulation of ama (toxin) in the body causes the joints pain and inflammation.

There are various factors like lifestyle and improper eating habits which causes vata aggravation and ama formation.

ASSOCIATED FACTORS THAT MAY WORSEN THE CONDITION

According to Ayurveda, aggravated or imbalanced vata, kapha dosha and accumulation of Ama, are responsible for joint pains.

General approach or any treatment procedure or formulation will be pacifying Vata and Amapachana.

For increasing the Agni, excretion of Aama and removal of vitiated and accumulated Doshas,  Shodhana and Shamana treatments are given.

This category of treatment comes under Panchkarma therapy. It consists of

Out of these treatments the medicated enema is considered to be the most effective and specific option for this category of diseases.

Based upon the clinical condition of the patient these can be advised less frequently or even every other day.

“Shamana treatments” are recommended when the patient is not able to tolerate the Shodhana treatments. These are also given as maintenance treatments after the purifying treatments, to pacify the remaining doshas. These treatments help eliminate accumulated Doshas and Aama out of the body and to regain strength. Various Ayurvedic herbal preparations used in the management of Aamavata are mentioned below:

APATHYA AHARA OR FOODS YOU SHOULD AVOID

The majority of allergens come from dairy and animal products, which cause an increased production of pro-inflammatory prostaglandins. 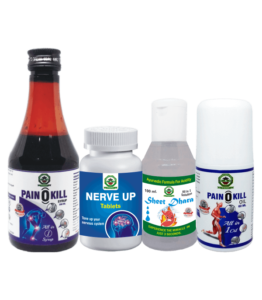