HomeBlog DISEASES OF VARSHA RITU (RAINY SEASON) AND THEIR PRECAUTIONS 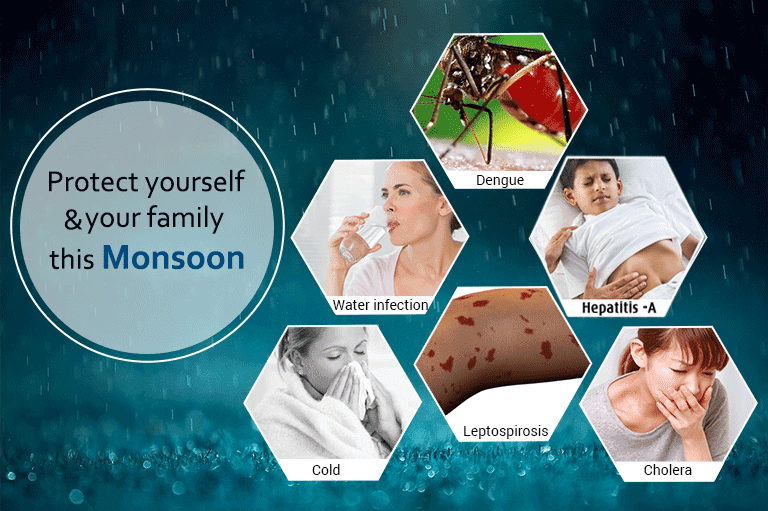 According to Ayurveda Varsha Ritu falls in the two hindu months of shravana and bhadrapada (Utarayana kala) and the general body strength of an individual is weak. One must follow a specific Diet and lifestyle schedule in varsha ritu (rainy season) as the chances of having metabolism issues is great during this season. Monsoon is the season where so many diseases can occur in our body due to vitiation of Vata and accumulation of Pita dosha. Imbalance of vata and pita dosha is the major cause of various diseases occurring during the varsha ritu (rainy season).

The sudden change in climate, causing fluctuations in temperature, is the major cause of flu and cold during the monsoon. During rainy season, the immune system weakens and becomes vulnerable to cough, cold and flu. Some symptoms include Fever, Aching muscles, Sneezing, Runny nose and Congestion etc.

Through the years viral fevers are a common symptoms, but during rainy season, they are the most common viral fevers last from 3 to 7days, however, it is always good to consult your physician before diagnosing anything.

It is highly infectious monsoon-related disease. The most common virus known to cause typhoid is salmonella typhi. The typhoid is usually transmitted through unsanitary food or water, and best part is that it is curable. The most common symptoms of the typhoid are a sore throat, cough, loss of appetite and constipation.

During rainy season diarrhea (Atisaara) is one of the most common health complaints. Diarrhea can be caused due to the consumption of unhygienic food and water.

Dengue is the most common disease which spread through mosquito bites of Aedes aegypti mosquito caused during rainy season.

Case of malaria disease rise in rainy season (varsha ritu) as there is a problem of water clogging in many areas. It is spread through Anopheles mosquitoes.

Varsha Ritu is the perfect time for body detoxification. Panchkarma is bio purification methods that cleanse your body through five treatments include basti, nasya, swedana, abhyanga, and snehana.