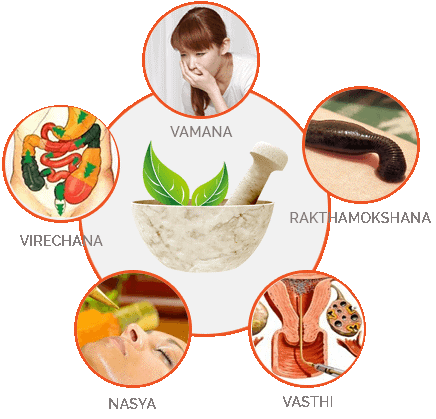 The medical system of Ayurveda is completely different from the modern system of medicine (Allopathy). This therapy does not directly attack any disease or its bacteria, but its aim is to make the patient’s immunity so strong that the disease or defects or other factors all end on their own.

There are many such diseases, even after treatment, they recur again and again in the body. To eliminate such diseases, the body needs to be modified from within. In ayurveda, for the prevention and treatment of these diseases, the healing process of elimination therapy, which removes the impurities and defects of the body, is called Panchakarma-chikitsa.

Panchakarma therapy is a very important part of Ayurvedic medicine. It is clear from the word Panchakarma that these are five types of special actions which remove impurities and defects from the body. The karmas which are performed before this therapy are called purva karma.

These five Karmas are as follows:

5- Nirooha Vasti (Another type of enema)

Some scholars like Sushruta have counted Raktamokshana or ‘Bloodletting therapy’ in place of Nasya in Panchakarma.

However, before doing all these deeds, it is very important to see whether you are physically and mentally fit or not. If you are not capable of that, then instead of benefit, there may be loss.

The preparation done before Panchakarma is called Purvakarma and the precautions and abstinence to be taken after it is called “Pachtkarma”. Let us know in detail about these five karmas.

In this therapy, the purification of the stomach is done by using drugs that induce vomiting, this is called ‘vamana’ karma.

This action is not done in hot and cold weather. The main purpose of this action is to expel the frozen phlegm in the body through vomiting.

This Vamana karma is very beneficial for such patients who are suffering from Kaphaja and Pittaja disease.

Vamana Karma is useful in the treatment of following diseases and problems.

Which people should have Vamana Karma?

People who are suffering from above mentioned diseases and are strong in body.

Also, the use of this therapy is beneficial for those who do not have any kind of problem due to vomiting.

WHO IS NOT ELIGIBLE FOR THIS?

In case of hunger, the patient should be given moong dal, boiled and sali rice with vegetable soup.

It is necessary to abstain from cold drinks, physical exercise, sex, anger, ghee or oil massage for a day. There should be no indigestion.

When medicines are used to expel the fecal matter located in the intestines from the anus, then this action is called virechana.

This is an important Purgation action. It is generally used in winter season but if there is any serious disease then it can be used in any season.

In which diseases is it beneficial?

Getting virechana kriya is beneficial in case of following problems-

Who should not get virechana done?

There are three types of Koshta in Ayurveda-

While doing virechana, pay attention to your Koshta.

The treatment which is taken through the nose in diseases of the head, eyes, nose, ears and throat is called Nasya or Shirovirechana.

Under this procedure also the phlegm is taken out. There are mainly two types of Nasya Karma:

It is useful in the following diseases:

This nasya brings Snehana in the upper limbs like head, nose etc. In this, oil or ghee cooked from the juice, kwath, kalk or powder of medicines containing oil or sweet juice is used.

It is useful in the following diseases-

Which people should not undergo Nasya Kriya

The process of putting any medicine in the anus is called ‘Basti Karma’. Basti karma in which only ghee, oil or other lubricating substances are used in large quantity is called ‘Anusana’ or ‘Snehan Basti’.

Who should not get Anuvasana Basti

Nirooha Basti (Another type of enema)

The basti karma in which kwatha, milk and oil of medicines are used for the purification of koshtha (feces frozen in the stomach), is called Nirooh Basti. This basti helps in bringing all the dhatus and doshas in the body in a balanced state.

Nirooh basti are of many types on the basis of qualities. Such as Deepana Basti, Lekhana Basti, Brihana Basti, Pichhilla Basti, Siddha Basti, Yuktarsa ​​Basti etc.

All these are used according to the nature of the disease and the patient. Here the introduction of the Niroha basi in general is being given.

Who is not eligible for Nirooha Basti

Patients suffering from the following diseases and problems should be niroha basti:

This process of treating by removing contaminated or infected blood from the body is called ‘Raktamokshana’.

This process of removing impure blood from the body is done in two ways:

1- Shastrakrita- To draw blood by any instrument

2- Ashastrakrita- To draw blood without tools

There are also two methods under this-

In the first method, it is treated by making an incision at the site of contaminated blood.

Whereas the second method is used when the contaminated blood is spread throughout the body.

Many methods have been described in Ayurveda to remove blood without tools.

In which blood extraction by leech, horn, alabu and bell instruments are the main ones.

Each of these methods is used to draw blood in certain diseases.

In which diseases is raktamokshan beneficial?

People who are suffering from the above mentioned problems should get Raktamokshan. But these methods are also used depending on the condition of the patient. For example, the process of extracting blood by sringa or alabu is done in tender individuals (fragile people).

Similarly, in those who are very delicate, a jalouka is used to draw blood.

Who is not eligible for Raktamokshana?

After getting Raktamokshana, if there is relief from pain and the intensity of the disease decreases, swelling ends and lightness is felt in the body, then it should be understood that this process has been done properly.